OLD VERSION OF THE PAGE

Insurers paid out more than PLN 10 billion in insurance compensation

In Q1 2019, Poles received PLN 10.2 billion in insurance compensation and benefits. Each hour of an insurer’s work amounted to PLN 5 million in aid for the injured. In Poland, damage covered by RCA is repaired once every thirty seconds.

‘In the first quarter of this year alone, insurers compensated more than 300,000 damages covered by RCA. The injured received more than PLN 2.3 billion in compensation and benefits, which is more than 2.5% more than the previous year’, said J. Grzegorz Prądzyński, president of the Board of the Polish Chamber of Insurance.

In Q1 2019, Poles spent almost PLN 6 billion on the protection of their vehicles, of which approx. PLN 3.7 billion constituted RCA contributions and approx. PLN 2.2 billion were comprehensive cover contributions. At the same time, we bought insurance against the effects of natural forces for more than PLN 1 billion. ‘The results for Q1 do not cover the costs of the flooding and windstorms which occurred in May this year. However, it is known that insurance companies are prepared for all weather conditions, both in organisational and financial terms. The simplest damages are already liquidated within one day and insurers commonly use simplified liquidation procedures’, explained Andrzej Maciążek, vice-president of the Board of PIU.

Poles spent more than PLN 5.2 billion in Q1 2019 on life insurance, which is 7.7% less than
in the same period last year. They received almost PLN 5.1 billion in benefits as a result.

‘Popularisation of individual protection of life and health is one of the biggest challenges in the insurance market. We live longer and our standard of living is increasingly higher; we often have credit liabilities for several decades. Proper life insurance should be the standard in terms of protecting our closest family’, stressed J. Grzegorz Prądzyński. 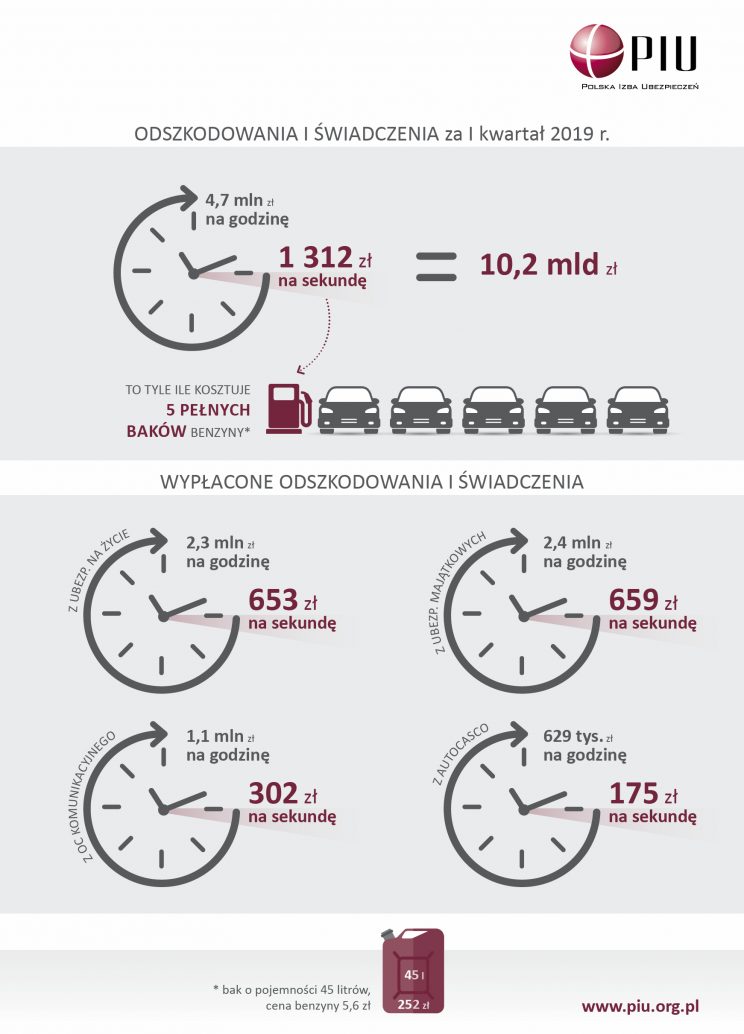 Insurers paid out almost PLN 20 billion worth of compensation